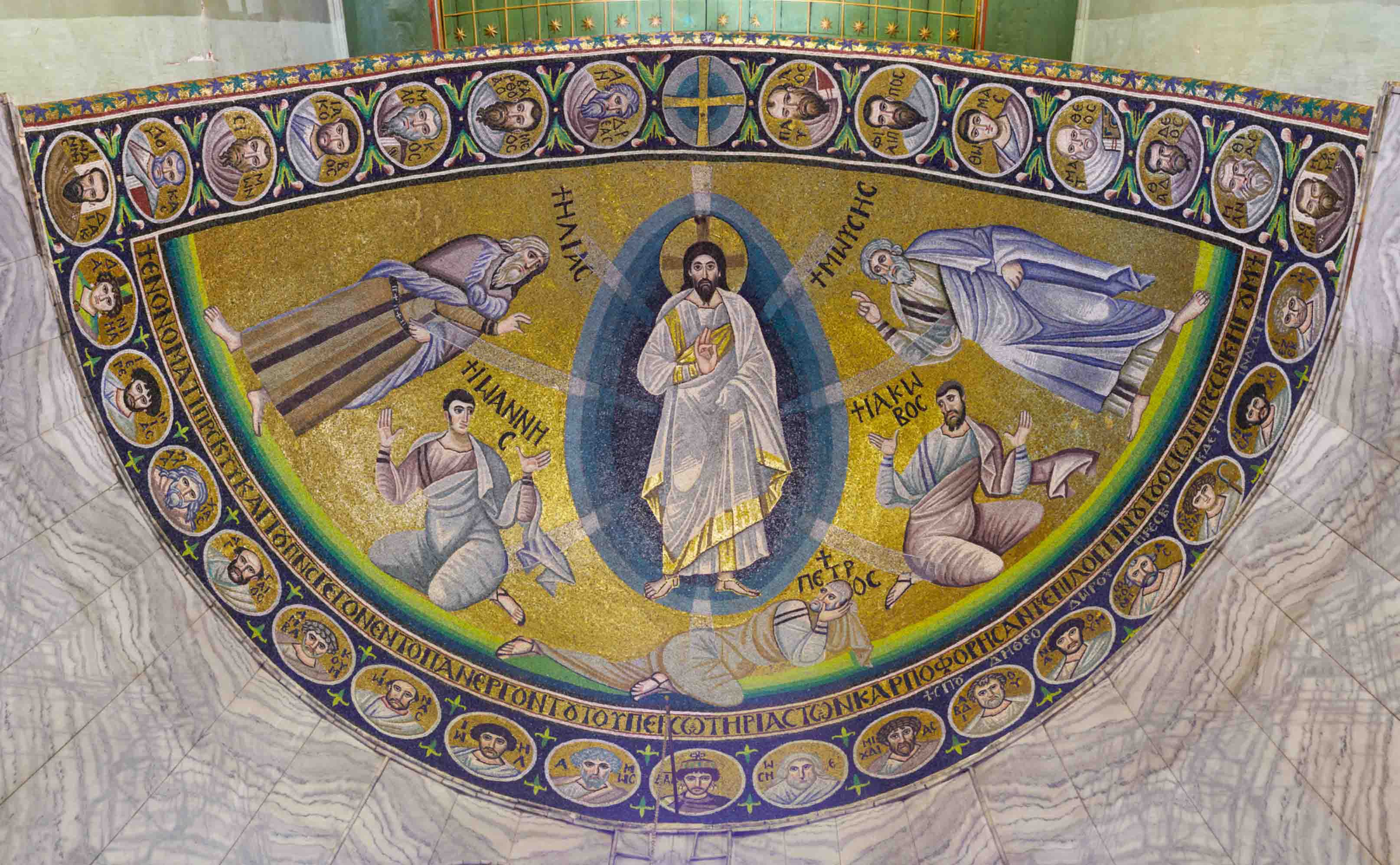 The Mosaic of the Katholikon

The ornately-decorated mosaic in the apse above the bema, depicting the Metamorphosis (Transfiguration) of Christ

Following the triumph of the Church in 313, large basilicas began to be erected, whose apses were adorned with themes of triumphal or eschatological character, or sometimes with themes referring directly to issues of dogma and liturgy.

During the time of Emperor Justinian, founder of the Sinai Monastery, the decoration of basilicas must have been magnificent. This is evident in the mosaic of the bema apse of the basilica. The mosaic was made when the basilica was built, after the death of Theodora (548) but before the death of Justinian (565). It is one of the great masterpieces of the period, and remains unique in its theme, the complexity of its theological elements, and its overall artistic merit.

The subject of the mosaic is the Metamorphosis (Transfiguration) of Christ. A magnificent figure of Christ, inside a light blue aureole that emanates bright transparent rays of transcendental light, stands in the middle of the central vertical axis. Prophet Elias stands to his right and Moses to his left, with a gesture as if preaching. The three apostles that accompanied Christ on Mount Tabor are portrayed in postures that demonstrate the magnitude of their awe, ranging from agitation to fear.

There is no portrayal of a mountainous landscape, as would be expected on Mount Tabor, but only a flat area of ground below. All the faces are rendered in light colors, while hues of white and light blue are used for their clothing. Christ is suspended in the air, the prophets stand firmly on the ground, while the disciples are prostrate upon the ground. The central image is surrounded by bands of portraits of apostles and prophets inside circular medallions; in the center of the lower band of portraits, on the same vertical axis as Christ, we find King David, in the style of a Byzantine emperor. His place there is a reference to the lineage of Christ on the one hand, and to Justinian on the other, as it closely resembles other known depictions of the emperor. On the wall face over the apse we find perhaps the oldest image of the Deisis, the Lamb of God, between two archangels, and busts of John the Baptist and the Mother of God. Higher up on the same wall, we find an image of Moses before the Burning Bush on the left, and the same prophet receiving the Law on the right. On the corners of the triumphal arch, there are portraits of Abbot Longinos, during whose time the mosaic was created, and Deacon Ioannis.

The theme of the mosaic is particularly pertinent to Sinai. In the Transfiguration, Christ appears fulfilling the scriptures and the prophecy about the Messiah, Servant of God and Son of Man. The disciples chosen to accompany him on this event are the same that will witness His final agony. The scene is also associated with the Theophanies granted to Moses and Elias on Mount Sinai - Horeb. In those two instances God spoke only “through fire and clouds.” Now, he appears before Moses, Elias and the disciples transfigured by the glory of God, revealing His two natures, the human and the divine, as is also attested by the voice emanating from the clouds. The voice on New Sinai confirms that a New Testament will take the place of the Old. The dogma of the two natures, as it was finalized in the Chalcedonian Ecumenical Council of 451, was one of the most influential in Byzantine art, and it is this very dogma that is presented in the mosaic.
The mosaic does not stress the historical event – there is no imagery of Mount Tabor – but emphasizes the Theophany. The light blue aureole isolates Christ from the gold background, and accentuates the brightness of his clothing – “and his raiment was white as the light”. The three solemn faces contrast with the agitated faces of the disciples. Christ appears almost translucent, with a two-dimensional body. The bodies of the prophets have a third dimension, while those of the disciples are more natural. This same differentiation is portrayed on the faces as well. The face of Christ bears a divine magnificence, that of Moses an inner peace, that of Elias passion, while the disciples display agitation and religious awe. The genius of the unknown artist in rendering the introspection of the faces reaches its peak in the portrait of John the Baptist. The great passion visible in his face, with its large eyes, is reminiscent of a Greek tragic mask, and contrasts starkly with the calm face of the Mother of God. The variety of facial expressions, the allusion to ancient Greek tradition, and the masterful execution of the work are certain signs that the artists came from Constantinople.

The Monastery of Sinai, Katholikon, The mosaic of the Transfiguration of Christ, Deacon John, probably Saint John of Sinai (Climacus), c. 565. PK

Concerning the mosaic composition in the katholikon of the Holy Monastery of Mount Sinai, based on the iconography, and the stylistic and historical criteria of the mosaic, we support the view that the mosaic ensemble can be dated to 565/566, immediately following the death of Justinian. In addition, we are also in agreement with the prevailing view that the mosaic was the work of a Constantinopolitan workshop. We would add, however, that this iconographic theme was created on Sinai, inspired by the monastery’s intellectual Hegumenos John, author of Klimax (Ladder of Divine Ascent), who is to be identified with the representation of Deacon Ioannis in the mosaic. From this, we understand that he served as a deacon in the monastery at that time. MPK

A short time later, the iconographic scheme would be enhanced with the addition of two encaustic images on the bema pilasters, the Sacrifice of Isaac and the Sacrifice of Jephthah’s daughter. The mosaics of Constantinopolitan churches that antedate the commencement of Iconoclasm in 726 were all destroyed. Fortunately, Sinai escaped this destruction, as it was by that time found in foreign territory. Thus, the Sinai mosaic stands as a unique testimony to the lost artistic works of the capital. GG