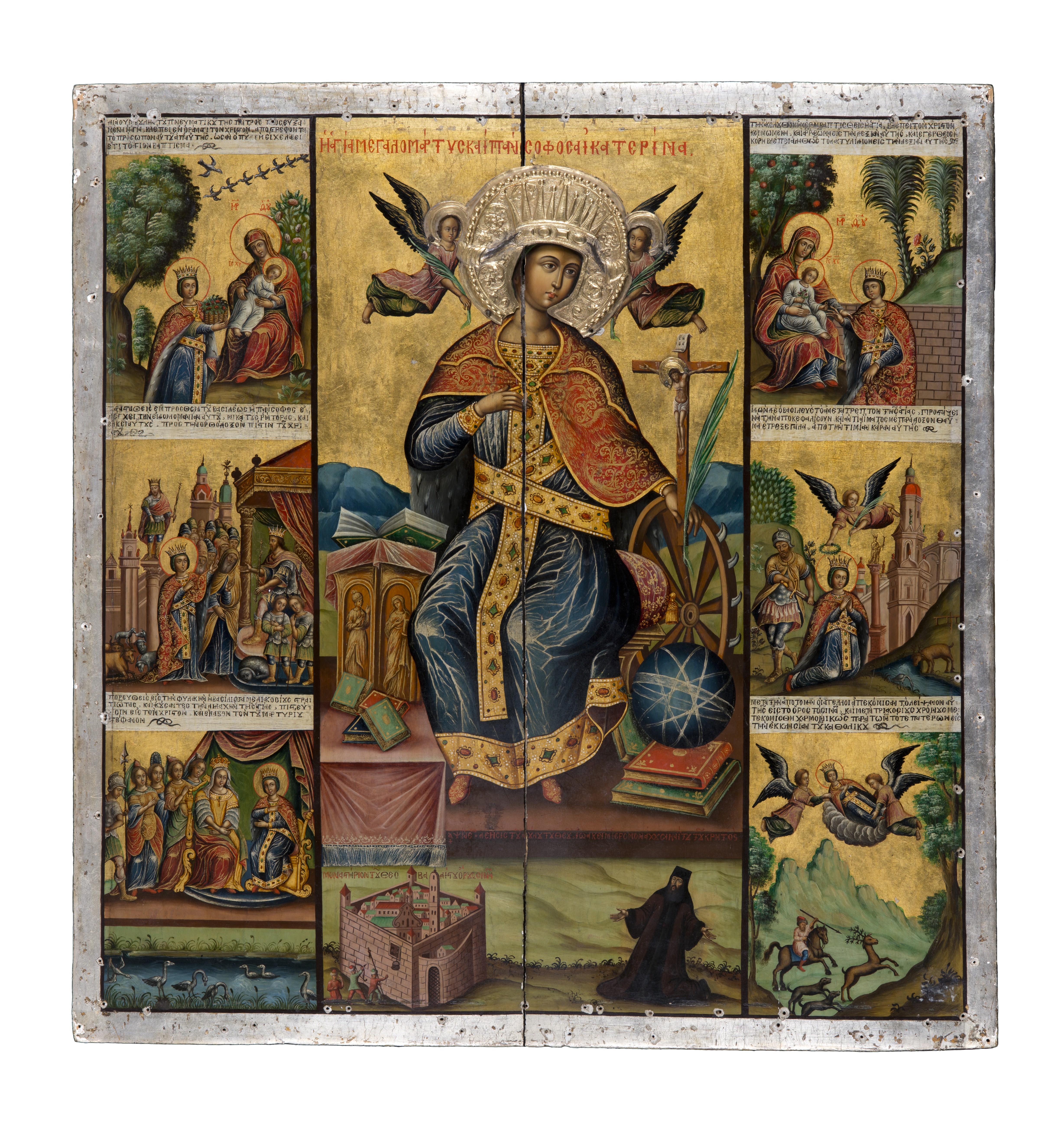 Who was Saint Catherine?

Saint Catherine, the namesake of the monastery, is one of the most popular early Christian saints. Although she was martyred at only 18 years old, the dramatic story of her short life is one of unwavering faith and powerful intellect.

"Saint Catherine with scenes of her life and honor." View item.

Let us praise the all–lauded bride of Christ, the godly Catherine, guardian of Sinai, and our help and support: for she brilliantly silenced the clever among the impious by the power of the Spirit; and crowned as the Lord’s Martyr, she asketh great mercy for all. (Dismissal Hymn of First Tone)

Saint Catherine, the namesake of the monastery, is one of the most popular early Christian saints. Although she was martyred at only 18 years old, the dramatic story of her short life is one of unwavering faith and powerful intellect.

A Short but Influential Life

Catherine was born around 287 in Alexandria, Egypt, an important center of culture and learning, as well as faith, in that era. Her father, Cestus, was a man of wealth and importance and his daughter Catherine was well educated in the sciences and the philosophical schools of thought of the ancient world. She was recognized as an intellectual and beautiful woman of the upper class.

At age 14, Catherine had a profound religious vision and decided to become a Christian. In traditional accounts, Christ appeared to her in a dream, giving her a ring, and asking her to be faithful to Him.

However, Catherine lived in troubling times for the followers of Christ. Alexandria was ruled by the Roman Emperor, Maxentius, and legend states that he used his power to cruelly persecute Christians, the religion endorsed by his rival, Constantine. The Emperor forced all his Roman subjects to offer sacrifices to the pagan gods and demonstrate their adherence to the ancient religion and obedience to the Roman state.

Catherine was unable to idly watch so many fearful Christians renouncing their faith. Forsaking her lineage, education, and wealth, she appeared before Maximinus to condemn his idolatry. She admitted that she was a Christian and that she was betrothed to Christ.

In an attempt to outwit and embarrass Catherine, Maxentius called 50 of the most brilliant philosophers to debate with her. Catherine spoke so eloquently that many of the philosophers became convinced and became believers in Christ. All were executed by Maxentius. Infuriated by Catherine’s triumph, the Emperor threw her in the prison and she was condemned to death.

During her imprisonment, hundreds of people came to visit her, including many officials, and even Maxentius’ wife, Valeria Maximilla. Each was converted to Christianity by the saint, and each was

Maxentius is said to have offered Catherine the choice of marriage to him or becoming his mistress. This could have given her power in this political situation but she refused his offer. Maxentius subjected her to all variety of toture but the saint, emboldened by the power of Christ, survived all of this torture unscathed. He ordered that she be executed on the “breaking wheel” but as Catherine was brought out, she touched the wheel, and it shattered. As the events had taken a particularly unfavorable turn for him, Maximinus finally ordered that she be beheaded and on the 25 of November, the date on which the Church venerates her memory, Catherine became a martyr. At the time of her execution, some sources say that there flowed a milky white substance rather than blood. Her martyrdom was in the year 305.

Εpitaphios of Saint Catherine This epitaphios (cloth icon) is embroidered on salmon-colored brocade fabric, and bears an inscription that refers to the donor who commissioned this piece in Vienna, Azarias the Protosynkellos of Sinai, as well as to other contributors such as priest Georgios, Theodora, and Cyraste, in the year 1805. The central scene includes Moses receiving the Tablets of …

The Saint of Sinai

The legend continues by saying that the angels then carried Catherine’s body and laid it on Mt. Catherine, near Mt. Sinai. Ancient texts report that the body of the saint was kept for almost three hundred years by ascetics before being discovered in approximately the year 800, during the time of the Byzantine Emperor, Justinian I, and the nearby monastery began to be named for her.

Catherine was selected by the church as one of fourteen “Holy Helpers”, who were thought to be especially powerful intercessors. Pilgrims travel to the remote monastery site to pray for healing. Martyrdom accounts, eulogies, hagiographies, chants, and poems that recount the life and martyrdom of Saint Catherine have been studied by scholars from the eighteenth century to this day. The story of her faith and purity became an especially powerful subject, especially in Renaissance art. And the name, Catherine, remains popular. She is venerated around the world on her feast day, November 25th.

Alexandria was founded in c. 331 BC by Alexander the Great in the vicinity of an Egyptian settlement named Rhacotis (that became the Egyptian quarter of the city). Alexandria grew rapidly, becoming a major centre of Hellenic civilisation, and replacing Memphis as Egypt's capital during the reign of the Ptolemaic pharaohs who succeeded Alexander. It retained this status for almost a millennium, through the period of Roman and Eastern Roman (Byzantine) rule until the Muslim conquest of Egypt in 641 AD, when a new capital was founded at Fustat (later absorbed into Cairo).

By the time of the Arab conquest of Egypt in 641 AD, the city had already been largely plundered and lost its significance before re-emerging in the modern era. From the late 18th century, Alexandria became a major centre of the international shipping industry and one of the most important trading centres in the world, both because it profited from the easy overland connection between the Mediterranean Sea and the Red Sea, and the lucrative trade in Egyptian cotton.