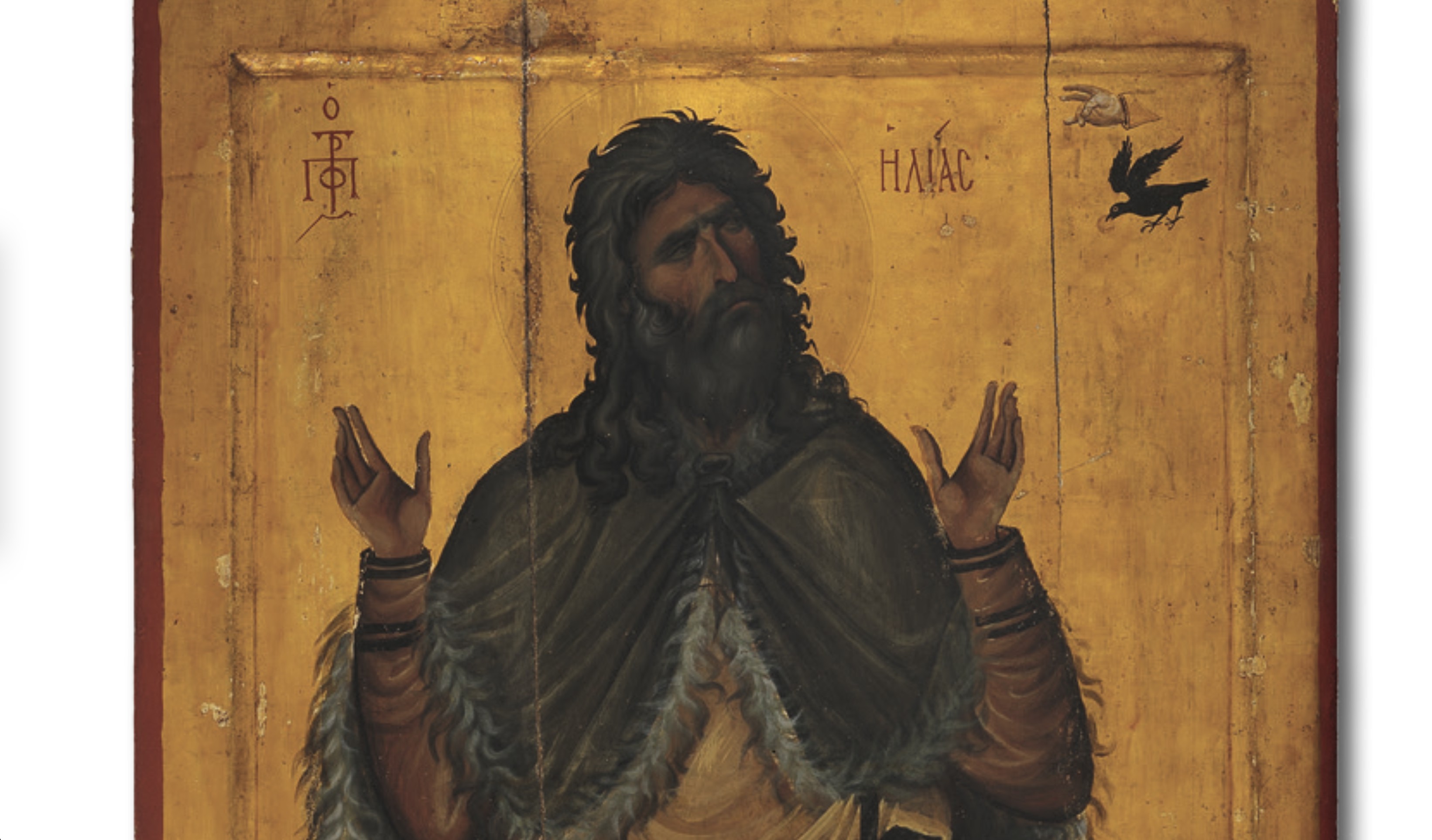 Leaving Beersheba, Elijah fled on foot “forty days and forty nights to Mount Horeb. And there he entered into a cave and lodged there... And the angel said: Go forth tomorrow and stand on the mountain before the Lord. And behold, the Lord will pass by.

Mount Horeb, the wondrous Mount of God where Moses received the Law, is also mentioned in the Bible as the place where the Prophet Elijah found refuge, fleeing from King Ahab and his impious wife Jezebel. Christian tradition, first recorded in Egeria’s account, has associated this biblical theophany since at least the fourth century with a remote plateau on Mount Horeb, known in Greek as Prophētēs Ēlias, or in Arabic as Farsh Ilia. It is on the path leading from the Monastery of Sinai to the Summit of the Law. The small biblical cave shelter can still be seen, incorporated in the altar of a chapel named after the Prophet Elijah, while, adjacent to it, a larger chapel dedicated to Elijah’s disciple Elisha was built at a later time. Both chapels were mentioned by medieval pilgrims, who repeatedly refer to the complex, describing it with the addition of a third chapel, now in ruins, dedicated to Saint Marina. A small garden in the plateau, with an age-old cypress tree and a well, are signs of a long and uninterrupted monastic and pilgrim heritage at the site. After the construction of a basilica at the Summit of the Law by the Emperor Justinian in the sixth century, its door keepers would leave the wondrous place by sunset, in order to stay overnight at the lower elevation of the Prophet Elijah’s plateau.

This biblical holy place, although second to the Holy Summit and the shrine of the Burning Bush, served as a special place for the veneration of the holy Prophet Elijah as a local saint by the Sinai monastic com- munity. In addition, the appearance of the Lord to him neither in the wind, nor in the earthquake, nor in the fire, but in the voice of a gentle breeze, was perceived in Orthodox theology as the very paradigm of divine revelation to man.

Moses and Aaron This icon of Sinai depicts Moses on the left, and his brother Aaron on the right. Aaron is anointed by Moses and is represented as the High Priest (Exodus 19, 130), wearing the appropriate vestments. The privilege granted to Aaron is confirmed by the miracle of the barren branch (Numbers 17) that bloomed. This miracle has …

“The meaning of Holy Writ reveals itself gradually to the more discerning mind in loftier senses when it has put off the complex whole of the words formed in it bodily, as in the sound of a gentle breeze. Through a supreme abandonment of natural activities, such a mind has been able to perceive sense only in a simplicity which reveals the Word, the way that the great Elijah was granted the vision in the cave at Horeb. For Horeb means ‘newness,’ which is the virtuous condition in the new spirit of grace. The cave is the hiddenness of spiritual wisdom in which one who enters will mystically experience the knowledge which goes beyond the senses and in which God is found. Therefore, anyone who truly seeks God, as did the great Elijah, will come upon Him not only on Horeb, that is, as an ascetic in the practice of the virtues, but also in the cave of Horeb, that is, as a contemplative in the hidden place of wisdom which can exist only in the habit of the virtues.” (St. Maximus Confessor, Gnostic Chapters 74, ed. G. C. Berthold, 1985).

Thus, it is not surprising that for the Sinai Brotherhood, the Prophet Elijah has been one of the most venerated holy figures, as attested by various icons, the earliest dating likely from the seventh century, and especially the monumental panel created by the painter Stephanos in the thirteenth century (photo 13). In common with the Prophets Moses and Aaron, Elijah is commemorated in the daily Dismissal prayers of the community, and in other parts of the holy services, following the local liturgical tradition, as it was recorded in the rubrics of the 1214 A. D. Typikon of Sinai; meanwhile, through the ages, Sinai monks have been named Ēlias (Elijah) at their tonsure. The recurrence of the name is well attested in the Diptychs of the reposed members of the community.