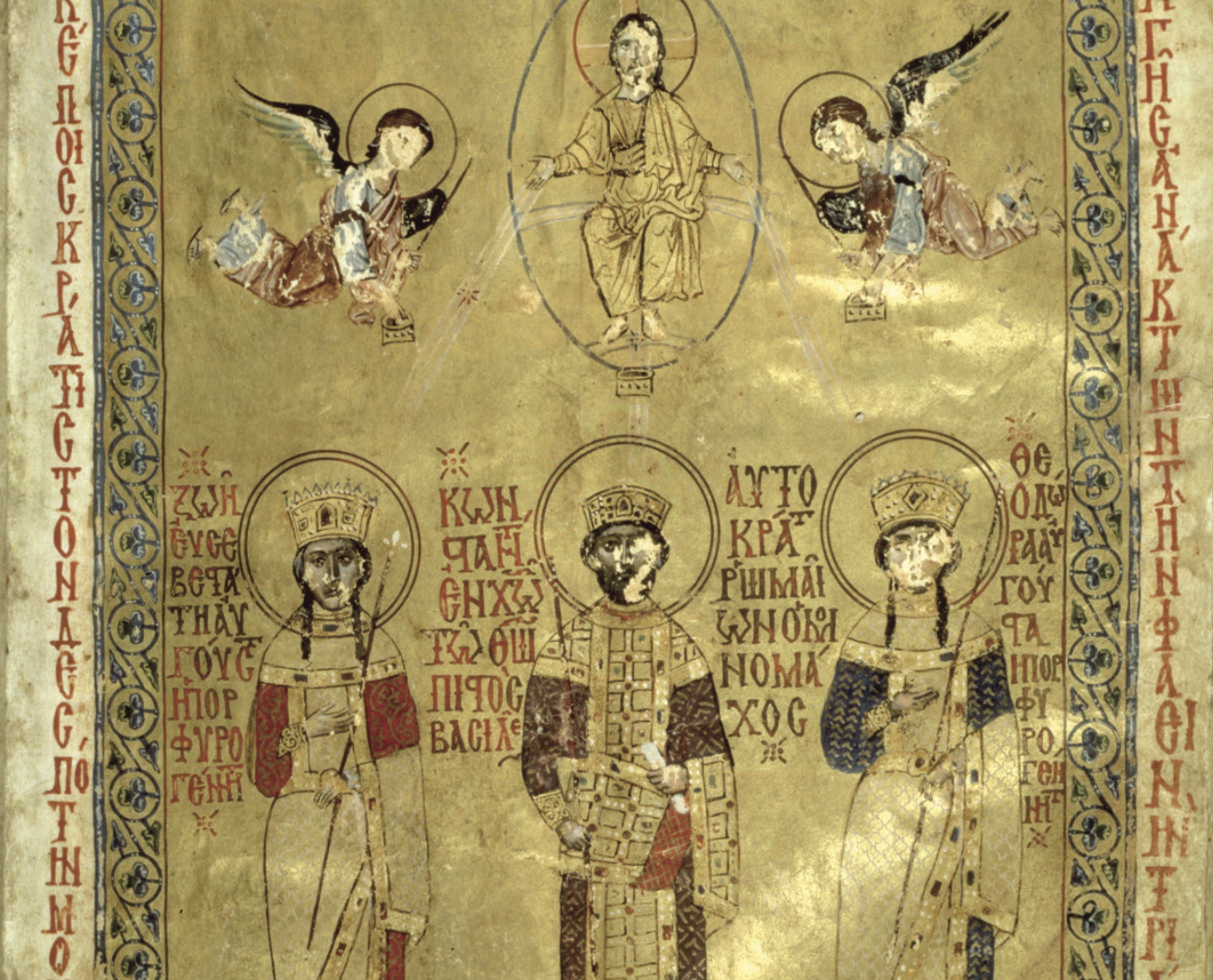 The illuminated manuscripts of Sinai are of great importance both in terms of subjects as well as artistic merit, and are closely associated with the history of the monastery and the development of Byzantine art

The Holy Monastery of Sinai, Library. The Emperor Constantine IX Monomachos between the Empress Zoe and her sister Theodora, Homilies of Saint John Chrysostom on the Gospel of Matthew, Codex 364, fol.3r, 1042-1050, [Room 6, 25.1]. Archive of the Monastery of Sinai

Christian faith could not have spread without the use of the written word. Reading the word of God, i.e., the Holy Scriptures is an essential part of devout life, as well as the Liturgy, which is impossible to conduct without the Bible. Books, in their current form, started to appear only in the second century, written by hand on expensive parchment.

The use of paper became widespread centuries later, essentially after the Byzantine period. The veneration of Christ and his saints was expressed in the decoration of illuminated manuscripts probably since the time of Emperor Constantine the Great. These were crafted by monks and nuns with immense reverence and love.

The illuminated manuscripts of Sinai are of great importance both in terms of subjects as well as artistic merit, and are closely associated with the history of the monastery and the development of Byzantine art. But above all they are confessions of faith. Their origin varies: many are donations – dedicated for the forgiveness of sins. Others were commissioned by the monastery, while many were created in Sinai to serve the current needs of its monks. The oldest dated books of the eighth and ninth century were created in Sinai and received rather simple decoration. Some are in both Arabic and Greek. Most of them are dated to post-Byzantine times and are liturgical books, lectionaries, psalters, menologia, and other edifying books, such as the well-known eleventh century Job [24.3], a book full of suffering and deliberation that still fascinates the devout.

The Holy Monastery of Sinai, Library. A protective grill against book theft was installed at the beginning of the twentieth century. A monk of Sinai presents Codex 339, including the Liturgical Homilies of Gregory of Nazianzos. G. Eric and Edith Matson Collection, [Room 6, 25.3].

Many copies of the Ladder of Divine Ascent, a work produced around the end of the sixth century by Saint John of Sinai, then abbot of the Sinai Monastery, contain a variety of miniature paintings, and on their cover bear the image of the Divine Ladder that leads the monk to the highest grade of perfection [25.4, 25.5, 25.6]. There are also manuscripts of the liturgical Orations of Gregory of Nazianzus, to be read inside the church or elsewhere [25.3]. The most beautiful and richly illuminated manuscript is number 339, that reveals the role of worship once expressed in the art and the faith of those who created it [25.3].

The eleventh century Christian Topography of Cosmas Indicopleustes, codex 1186 [24.2], is a landmark of Byzantine illuminated manuscripts. It is a copy, made in Sinai, of a lost manuscript written during the sixth century in Alexandria. Two more copies of this manuscript survive: in Florence and in the Vatican. The Sinai manuscript, however, is the one that contains the most illustrations. It is also singled out due to the richness of its cosmographic diagrams, the clear religious scenes, and it expressionistic artistic style. Similar trends continue in the following years, and strengthen the artistic ties between Sinai and Crete, the West and the Orthodox East, but also with the Muslim world, whose trust the monastery had managed to earn. These manuscripts bear testimony to the fact that Sinai was truly a crossroads of religions and civilizations. GG

Inscribed cross with Christ and the Mother of God Medium sized metal cross, with a small protrusion …

Letter/Affidavit by K. Tischendorf on September 16th / 28th 1859 promising to return the Codex Sinaiticus to the monastery of Sinai On September 16th 1859, the eminent German Biblical …

Psalms A psalter that had been the only manuscript …

Codex Sinaiticus Syrus, or Codex Syriacus 30 The first writing of the codex was executed …

Basket for the storage of scrolls This basket is made of vertical, wooden battens …

Euchologion The tenth century manuscript is Slavic. It is …