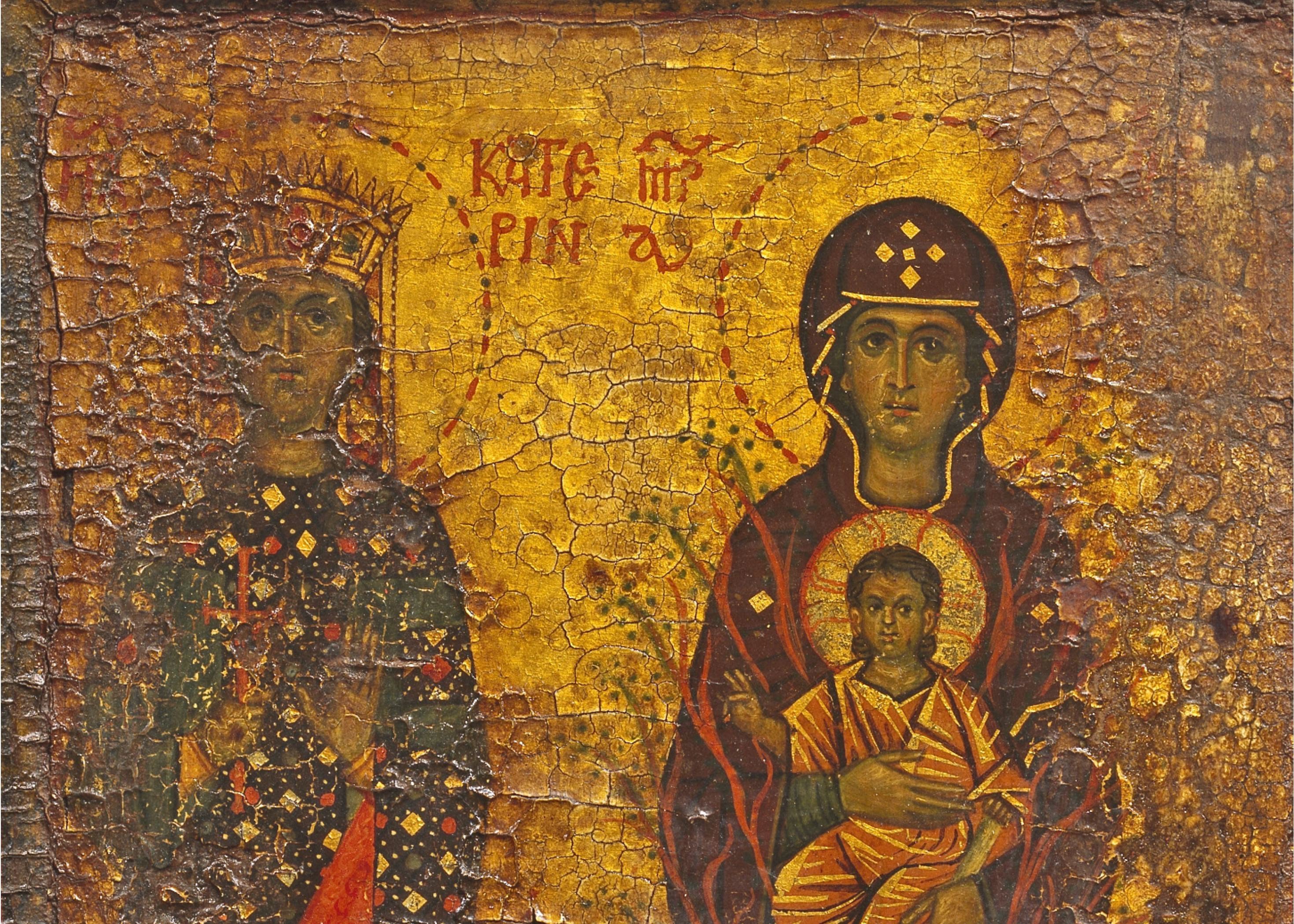 Icons of the Virgin of the Burning Bush in Sinai

The Mother of God has been omnipresent in Sinai ever since Moses saw the Vision of the Virgin in the form of the Burning Bush at the foot of Mount Sinai. He heard the voice of God asking him to remove his sandals, “for the place where you are standing is holy ground” (Exodus 3:1-5).

God subsequently appeared to Moses at Sinai and delivered the Tablets of the Law to him. The transformation of Mount Sinai into one of the ultimate Old Testament loca sancta created the appropriate conditions for hermits to live there from at least the fourth century till the middle of the sixth century, when the Emperor Justinian was requested by them to establish a fortified monastery at the foot of Mount Sinai, at the site where the Burning Bush was still standing. Consequently, the monastery was dedicated to the Virgin of the Bush.

Among the many representations of the Mother of God in portable icons in Sinai, special emphasis must be given to the icons of the Virgin of the Bush, as this is her most Sinaitic representation. It is the locus sanctus icon of the Mother of God in Sinai. However, it is strange that the image of the Mother of God in the form of the Burning Bush first appears in the icons of Sinai quite late. The earliest surviving representation of the Virgin in Sinai, in which she is inscribed as Μήτηρ Θεοῦ ἡ τῆς Βάτου (“Mother of God of the Bush”) shows the Virgin in the iconographic type of the Kyriotissa. This icon is signed by the painter Petros, whose presence in the monastery is documented in the 1220s. Petros’ work is perhaps significantly associated with the visit of the Patriarch of Jerusalem, Euthymios II, to Sinai. The latter died in Sinai and was buried in the monastery. His marble tombstone, still standing in the north-east corner of the monastery’s basilica, bears an inscription in Arabic and Greek with his date of death, December 13, 1223. An icon by the painter Petros shows Moses with the Tablets of the Law and Euthymios II, in supplication, on either side of the Virgin Blachernitissa, in the form of a full standing Mother of God, orans, with the Christ-Child in a medallion before her breast. This icon must have been painted around the time of Euthymios II’s death, as he is referred to in it as μακάριος (“blessed”). It seems probable that this icon hung next to his tomb. The earliest surviving representation of the Virgin as the Burning Bush along with Moses removing his sandals is found today not in Sinai but in Jerusalem. This is a late-twelfth-century icon in the Greek Orthodox Patriarchate of Jerusalem. The Virgin is seated in the center of the flaming Bush, while an angel approaches her from above. A medallion with the Christ-Child before her breast brings this depiction closer to the Blachernitissa iconographic type. She holds a spindle in her right hand as if it were an Annunciation scene. It should be noted that already by the fourth century, various Church Fathers had interpreted the miracle of the Burning Bush as an Old Testament parable of the Virgin Mary as the vessel for the birth of Christ.

It is reasonable to ask why such an important image as the Virgin of the Bush, which became the locus sanctus icon of the Mother of God in Sinai, did not acquire its own iconographic type, but was based on that of the Virgin Kyriotissa and, occasionally, on the Virgin Blachernitissa, both of which are of an undeniable Constantinopolitan origin.

In an icon in Sinai with Saint Catherine and the Virgin Kyriotissa, the flaming Bush spreads from the ground and covers the Virgin’s body (Room 2, 7.5). In this icon Moses, in a diminutive scale, is depicted between Saint Catherine and the Virgin, and is standing in front of the Bush, taking off his sandals. A second Moses, also in a diminutive scale, stands to the right of the Virgin raising his right hand. This icon, generally dated to the thirteenth century, does in my opinion have many of the features of Petros’ style. If this connection is accepted, the icon was most likely painted in the 1220s.

In another icon at Sinai, the diptych with Saint Prokopios on the left wing and the Virgin Kykkotissa on the right, the Virgin of the Burning Bush, painted on the upper frame of the right wing, has adopted a different iconography: an orant Virgin, in bust, fully immersed in the flaming Bush. This brings the depiction of the Virgin of the Bush closer to the Blachernitissa iconographic type, and this connects it with the icon today in the Greek Orthodox Patriarchate in Jerusalem, already mentioned above.
Though this short essay focuses on icons, it is relevant to take into account the fresco representation of the Virgin of the Burning Bush in the apse of the chapel dedicated to Saint James, located in the north-eastern corner of the Sinai basilica (Phot. 46). The Virgin of the Bush is shown in the center of the composition between Saint James and Saint John Chrysostom, on the left, and Saint Basil and Moses, on the right. Her depiction follows the iconographic formula of an orans Virgin with her hands in an open gesture, while the flames of the Bush are engulfing her figure. The fifteenth-century date of this fresco, proposed by Manolis Chatzidakis, has been challenged by Vojislav Djuri and more recently by Georgi Parpulov, who suggested a thirteenth-century date. This thirteenth- century date seems the more persuasive for this fresco, which also makes a case for its attribution to Petros.

What emerges from this brief survey is the importance of the special status of the monastery at Sinai in the development of the imagery of the Virgin of the Burning Bush. It is an important case of a new iconography developed in the region, and not at Constantinople. It may also have been stimulated by such local circumstances as the discovery of the relics of Saint Catherine, but the insistence at the same time to continue the even greater significance of the places where God was believed to have appeared to Moses, and in the case of the Bush, to have foretold the birth of Christ in the womb of a virgin. MV