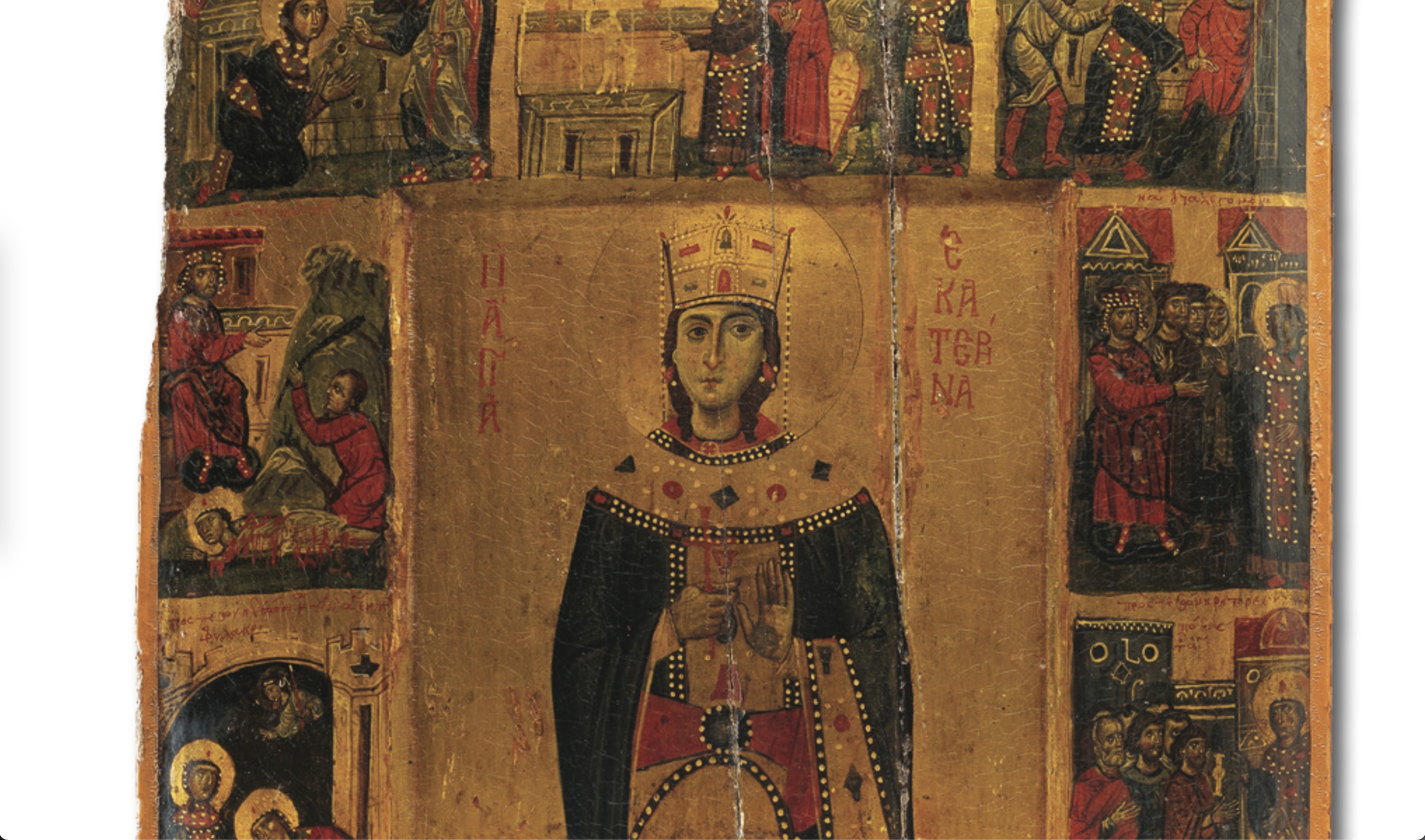 The Martyrdom of Saint Catherine and Sinai

Martyred in Alexandria in the 3rd Century after resisting the emperor's promises, Catherine became the patron saint of the Sinai monastery.

Let us praise the all–lauded bride of Christ, the godly Catherine, guardian of Sinai, and our help and support: for she brilliantly silenced the clever among the impious by the power of the Spirit; and crowned as the Lord’s Martyr, she asketh great mercy for all. (Dismissal Hymn of First Tone)

Saint Catherine was martyred for her faith in Christ in the early fourth century, in Alexandria, and was indelibly associated with Mount Sinai following the miraculous discovery of her holy body at the summit of the Sinai peninsula and its subsequent translation to the Sinai Monastery. Martyrdom accounts, eulogies, hagiographies, chants, and poems that recount the life and martyrdom of Saint Catherine have been studied by scholars from the eighteenth century to this day.

We assume that a mention in the work Ecclesiastical History (fourth century) by Eusebios of Caesarea, even though it does not explicitly name the Saint, must actually refer to Saint Catherine, thus making it the oldest surviving reference. The oldest explicit reference to her seems to be the detailed account of the dramatic events of her life, as given in the narration of her martyrdom, the work of an unknown author of the late sixth or early seventh century (according to Viteau, 1897), a time when Saint John of Sinai, the author of the Ladder of Divine Ascent and abbot of Sinai monastery also rose to prominence. In traditional accounts, Christ appeared to her in a dream, giving her a ring, and asking her to be faithful to Him.

According to the narrative of the anonymous account of her martyrdom, Catherine was a young woman of Alexandria, distinguished for her beauty and aristocratic lineage, and known for her wisdom, as she had been taught all then known sciences and the philosophical schools of thought of the ancient world. During the severe persecutions that Maximinus II, Caesar and then Augustus of the East, engaged in, during which all Roman subjects were ordered to offer sacrifices to the pagan gods to demonstrate their adherence to the ancient religion and their subjugation to the Roman state, Catherine could not endure the loss of so many souls to idolatry, and Christians renouncing their faith due to fear. Forsaking her lineage, education, and wealth, she appeared before Maximinus to challenge his imposition of idolatry. She admitted that she was a Christian and that she was betrothed to Christ. The ruler, failing to convince her to offer sacrifices to the pagan gods, ordered fifty eminent orators to engage in a dialectic debate with her. Catherine, with the help of divine wisdom, drew on arguments from ancient Greek philosophy, and managed to convert the orators to the faith of Christ; Maximinus was so infuriated that he ordered their death by fire.

Saint Catherine with scenes of her life and honor Saint Catherine is depicted accompanied by angels holding up her halo. The symbols of the Mother of God adopted by Cretan painters in the sixteenth century refer to her learning, her struggle for Christ, and her martyrdom and triumph. Six scenes from her life are added to the icon, the last one being the translation of …

A similar fate eventually awaited the wife of Maximinus, who secretly visited the Saint in her prison cell, as well as other officials, who, following her teachings, converted to the Christian faith. The ruler was again so infuriated by these unforeseen incidents, that he ordered the Saint to be subjected to various tortures, including being broken on a wheel; the Saint, emboldened by the power of Christ, survived all of this torture unscathed. As the events had taken a particularly unfavorable turn for him, Maximinus finally ordered that she be beheaded, on the twenty-fifth of November, the date on which the Church venerates her memory.

The martyrdom account states at the very end that the invincible body of the martyr Saint was miraculously translated to Sinai, though up to the time of writing, it had not been located, and remained unseen, just as Saint Catherine had requested before her martyrdom. It is, thus, probable that at around the end of the sixth century, when the newly established coenobetic Monastery of the Most Holy Theotokos in the Valley of the Bush was spiritually rising, the tradition of the translation of the Body of the Saint to Sinai was already known, though not its exact location therein.

The author of the Martyrdom, a scholar knowledgeable in ancient Greek texts, must have recorded the oral tradition of his time, possibly also drawing upon older written sources. The Patriarch of Jerusalem Nectarios of Crete in his Epitome of the Sacred History of the World (1670), as well as other anonymous writers of pilgrim guides in post-Byzantine times, recorded a similar oral tradition of the monastery several centuries later. They reported that the Body of the Saint was kept for almost three hundred years by ascetics on the top of a nearby mountain in south Sinai, which was later named after her.

It appears that the holy relics were translated to the Katholikon of the Monastery much later than the time of the construction of the Justinian building, most probably sometime between the early seventh and the ninth century. The following years saw the spread of the veneration of the Saint throughout the Christian world, the writing of a musical can-on in the early ninth century, the writing of her “official” biography by Saint Symeon the Translator, and several references in texts of the Synaxaria, the oldest of which is the Menologion of Basil, a tenth century work. Sinai Monastery and its protector Saint Catherine became known in the West after Simeon οf Trier arranged the translation of relics of the Saint to Rouen and Treves sometime before the year 1035. The holy relics which “con- stantly exuded myrrh” by the second half of the twelfth century, were placed in an intricately carved marble reliquary, with a special depression in the bottom to collect the myrrh, a work of art probably made in Jerusalem by the end of twelfth century and now on display in the Monastery [Room 4, 15]. Sometime around the end of the eighteenth century, the renowned stonemason Procopios of Caesarea fashioned a new, elaborate marble double case with a ciborium, spending “nine years of skillful work” on its construction; the holy relics were placed in it, and are kept there to this date.

Saint Catherine was a popular subject in ecclesiastical art, and was depicted in icons, [Room 2, 7.5], gold embroidery [Room 3, 10.9, Room 4, 14.5] and miniature work. The oldest known depiction of the Saint is a port- able icon kept in the Sinai Monastery dating back to the eleventh century [Room 4, 14.1]. Most surviving miniatures of the Saint date back to the fourteenth century [Room 4, 11.2], while a large number of portable icons of the Saint from the post-Byzantine religious painting tradition of Crete survives in Sinai and elsewhere.