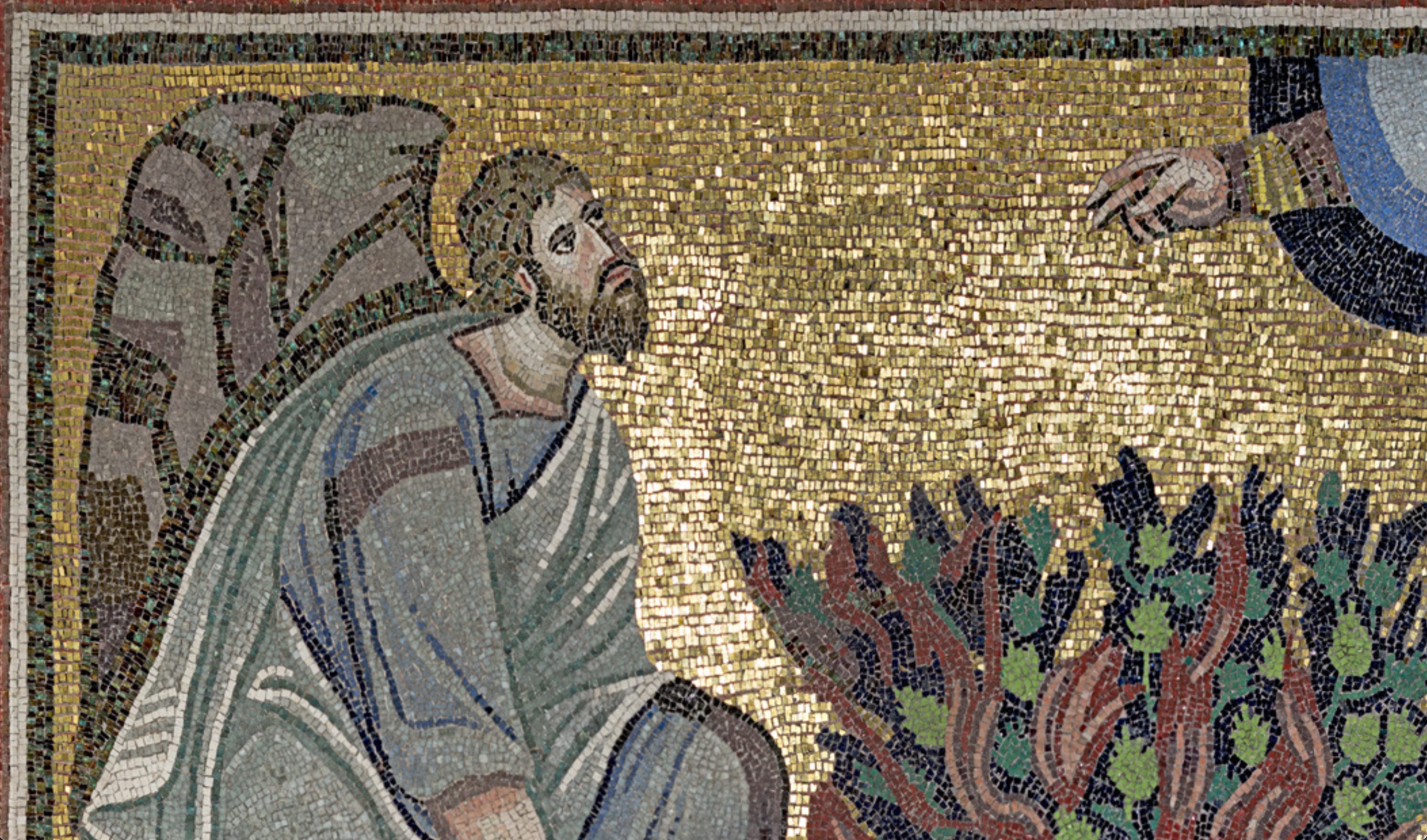 Moses in Sinai, the Holy Bush and Saint Catherine

«...And he said, Draw not nigh hither: loose thy sandals from off thy feet, for the place whereon thou standest is holy ground» (Exodus 3:5)

The Holy Monastery of Sinai, Katholikon. Detail of the mosaics above the apse of the bema, depicting Prophet Moses loosening his sandal before the Burning Bush.

The Prophet Moses holds an important place in the revelation of God, who for the first time speaks to man and reveals His plans.

Moses’ call and the revelation of the will of God were chosen by Divine Providence to take place on Mount Sinai. Following forty years of prayer, as he was grazing his goats on Mount Horeb, Moses encountered the great mystery of the “Bush that burned yet remained unconsumed” and heard the voice of the Lord calling his name and asking him to remove his sandals, as the ground he was treading on was sacred. The Church interpreted the vision of the Bush as a foreshadowing of the mystery of the childbirth of the Mother of God. As the Bush was burning but remained unconsumed, so the Theotokos after the incarnation of the Logos remained ever Virgin.

At this most sacred site of the Bush, the Sinai Monastery was founded several centuries later and, according to the writings of Procopios, personal historian of emperor Justinian, dedicated to the Theotokos, whose veneration had been long linked to the Holy Bush. Some early surviving icons of the monastery offer us particularly valuable insight into the his- tory of icons in religious life, as they emphasize the importance of the Theotokos, who is represented by the Bush in iconography as well. Since the eleventh century, Moses is also linked to the Theotokos of the Bush in iconography, and several other icons depict both the holy figures and the sacred site. Moses, though, is again called on to ascend the most sacred Mount Sinai, and bless it, since that would be the site where God would descend to present Moses with His Law and His commandments. This occurrence – after which the Mountain was also named Theovadiston (God-Trodden) – will become a major theme in Sinai iconography which explicitly depicts the site and the Revelation of God. However, Moses only heard the voice of God, and did not see His face on Mount Sinai. That face would be revealed to Moses during the Transfiguration of Jesus Christ. Justinian’s artists would later depict this magnificent event in the grand mosaic in the apse of the basilica.

Saint Catherine with scenes of her life and honor Saint Catherine is depicted accompanied by angels holding up her halo. The symbols of the Mother of God adopted by Cretan painters in the sixteenth century refer to her learning, her struggle for Christ, and her martyrdom and triumph. Six scenes from her life are added to the icon, the last one being the translation of …

The holy relics of the great martyr Saint Catherine were miraculously discovered sometime in the tenth century, or even earlier, and transported to the monastery for safekeeping. Gradually the monastery transferred its dedication, and the Saint was added to the Sinai iconography. At first she was associated with the Virgin of the Bush, and appeared among other saints and prophets, while later on, her life was depicted, and she was associated with the Theotokos and Moses. At any rate, the veneration of Saint Catherine spread, and she gradually became the saint of Sinai, dominating the relevant iconography. The Theotokos and Moses retain their places as bearers of God’s revelations, and the overall sanctity of the site. The religious treasures, a sacred inheritance of icons, manuscripts, liturgical vessels, and vestments which have been accumulated over the centuries and are now preserved in Sinai, the veritable fortress of Orthodox faith, are the material testaments to these holy events, and to the profound faith of pilgrims.