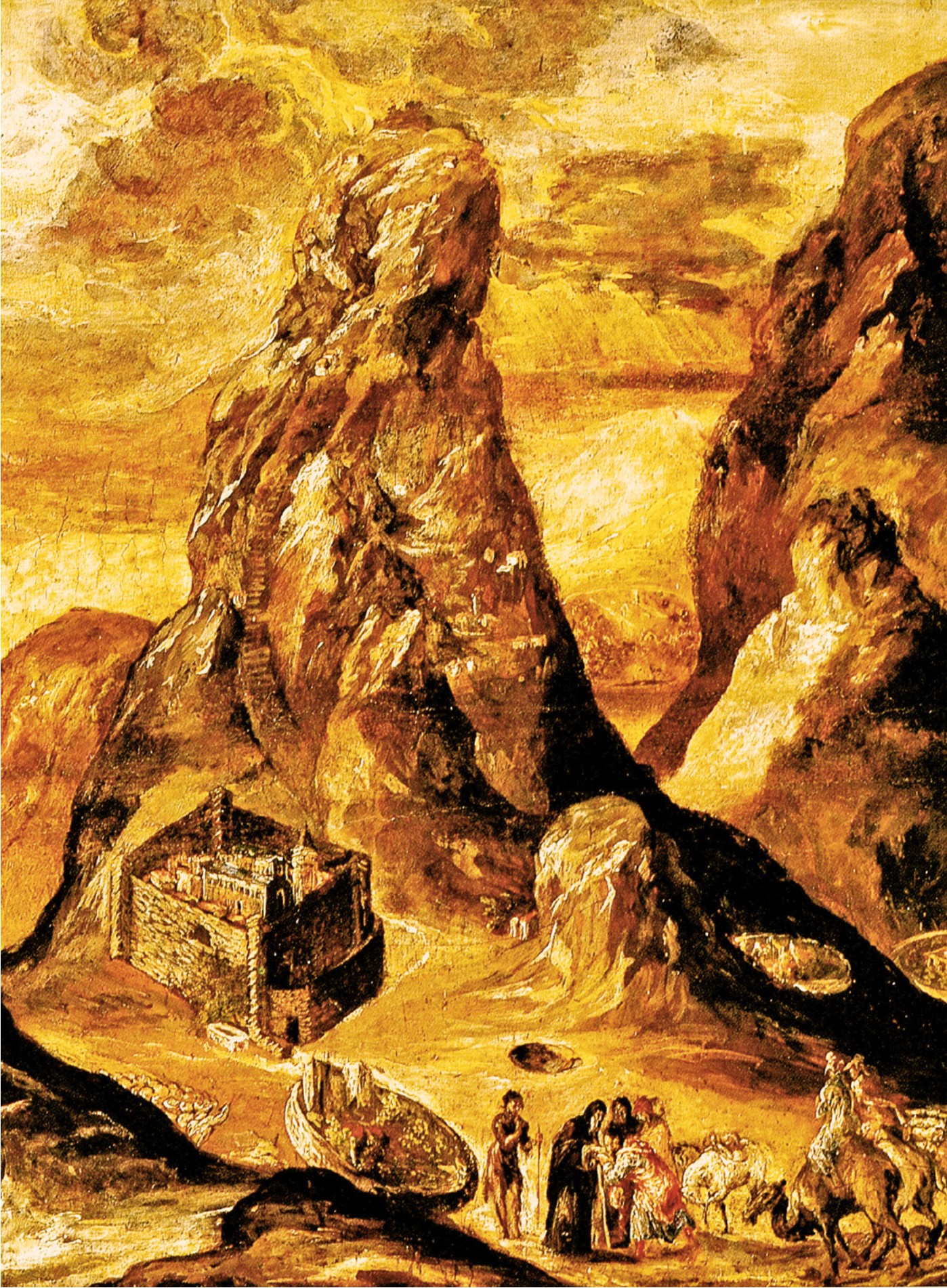 Historical Outline of the Monastery of Sinai

Mount Sinai, the Holy Monastery of Sinai and its surroundings. Detail of painting by Domenikos Theotokopoulos, c. 1570, (Historical Museum of Crete).

The Sinai peninsula, with its evocative desert landscape exemplifying a land of utter solitude and hard asceticism, was linked from early Christian times with the development of the ascetic ideal as a means towards spiritual accomplishment.

By the time of emperor Justinian I’s ascension to the throne of Constantinople in 527, the number of Sinai monks had become considerable, and they were actively participating in the struggle of the established Church against heresy. Following their petition, or even maybe that of the elder Theonas, apokrisiarios of Holy Mount Sinai, Raithou, and Faran, the emperor erected a glorious basilica, dedicated to the Theotokos, in the area of the Holy Bush, and surrounded the Monastery with a heavy fortification wall. The fortress-like form of the monastic complex served both to defend the monastery against Saracen barbarian raids, and to exert a Byzantine military presence in the outermost regions of the empire.

The impressive buildings erected by Justinian and the security provided by the established military guard allowed the rapid expansion of the monastery. Nevertheless, the monastery’s increasing prestige during this period is attributed to the spiritual endeavors of esteemed ascetics, who either resided in the monastery or sometimes even attained the rank of bishop. In the sixth century, Saint John of Sinai authored the Klimax, a work that epitomises the experience of monastic fathers of the desert, and is acclaimed as the principal manual of monastic life in the Christian East. In the seventh century, Anastasios of Sinai composed the widely circulated antiheretical Odigos, as well as other works of asceticism and spiritual counsel. The writings of the two monks of Sinai, together with a multitude of other written works, for instance the ascetic treatise On Watchfulness and Holiness by Hesychios of the Burning Bush, authored within the spiritual milieu of the monastery, forged its characteristic quality and decisively influenced the development of ascetic theology of the Orthodox Church to this day. During the first decades of the seventh century, before even completing its first centenary as an imperial edifice, the monastery found itself in Arab territory under the authority of the new religion of Islam that spread rapidly through the eastern Mediterranean. Though the majority of the Christian populace of the Sinai Peninsula converted to Islam the monastery itself survived, despite considerable adversity, thanks to the tolerance of the new religion. The Ahdname of prophet Mohammed, attributed to Mohammed himself, guaranteed the continuing functioning of the monastery, and illustrates the respect both he and his successors showed towards a quintessential holy, biblical, and Christian site. Hence, the Fatimid period, for which historic sources are scarce, appears to have been peaceful on the whole, despite the occasional persecution, such as that of caliph Abu Ali Melek Dhar (Al-Hakim) in the early part of the eleventh century. The monks kept a low and discreet profile, by accepting, early in the eleventh century, the construction of a Muslim mosque inside the courtyard of the monastery; at the same time, their continuous and courageous assistance to the surrounding Bedouin communities allowed the continuance of the historic life of the Sinaite brotherhood.

Saint John the Baptist. This icon must have been part of a Deesis, together with two other icons, one of Christ in the center, and another of the Mother of God on his right. The asceticism and suffering of the tragic Prophet are portrayed in the most intense manner during the last phase of Palaeologan art. Lighting in this scene …. View item.

Despite the fact that surviving texts and inscriptions give the impression that the monastery was destitute from the mid-seventh up to the eleventh centuries in particular, its spiritual activity did not cease. After the dissolution of the episcopate of Faran, Sinai monastery became the seat of the episcopate, whose jurisdiction extended throughout the Sinai peninsula. Greek, Arab, Georgian and monks of other nationalities resided there, and the old tradition of copying manuscripts continued, mainly for the religious needs and the education of the monks. At the same time, endowments continued to arrive both from the empire of Constantinople, and from distant Georgia.

The promotion of the worship of the Alexandrian great martyr Saint Catherine also added to the spiritual appeal of the Monastery throughout the wide Christian world. The translation of holy relics of the saint to France, during the first decades of the eleventh century, by monk Symeon of Trier decisively contributed to the expansion of her veneration by western Christianity. Now, Christians from both the East and West would make the pilgrimage to the monastery that guarded the relics of the Saint.

During the time of the Crusades and the ensuing period of Latin rule the monastery possessed large stakes of land in the East, including Crete, Cyprus, Palestine, Syria and Constantinople. The delicate balance attained by the monks of Sinai with the Arabs during this crucial time, as well as the respect it enjoyed from Christians in the West, protected the monastery from untoward consequences, and allowed both it and its dependencies to survive intact. This fact is attested to by a series of Papal seals and Venetian decrees dating all the way back to the early thirteenth century.

Codex Sinaiticus Syrus, or Codex Syriacus 30. The first writing of the codex was executed in the early fifth century and was essentially a copy of the oldest translation of the Gospels in the Syriac language, from the third century, now known as the “Old Syriac” or protosyriac. As the Old Syriac translation is preserved in only one other manuscript, and because it …. View item.

Nevertheless, the ‘umbilical cord’, so to speak, that linked the monks to Constantinople and the tradition of the Orthodox Church remained intact. Sinai monks were frequently encountered in the imperial court of the Comneni dynasty, while in the time of the Paleologan dynasty the emperors still considered themselves patrons of the monastery. The piety of ordinary worshippers is attested by the dedication of several icons and celebrated manuscripts. Still, the most important aspect is that in the eyes of Christians of the Orthodox East, Sinai remained the quintessential site of ascetic life and Godly quietude. Another important development was that the spiritual movement of Hesychasm that dominated Byzantium during the fourteenth century was largely linked to the ascetic experience of Saint Gregory of Sinai, a renowned monk who led an ascetic life for several years in the Sinai desert. The support of Christians together with the long tradition established by the Fatimid caliphs helped the monastery weather the considerable difficulties of the Mamluk sultan dynasty of Egypt (thirteenth – early sixteenth centuries). Accounts from this period speak of raids, lootings, the desolation of sites, serious crises and destitution. At the same time, though, we have evidence of several favorable decrees issued by the sultan in defense of the monastery.

In 1517 Sinai was appended to the Ottoman territory. The Sultan Selim the First not only recognized the ‘Ahdname’ of Mohamed, but further augmented the privileges of the Sinai monks. The integration of the Sinai area into the Ottoman Empire ended the isolation of the monastery, and allowed the free transit of monks to the area of Ottoman rule of the Orthodox East, as well as the free travel of numerous pilgrims to the holy site.

During this period, the monastery became more prestigious, new dependencies were bequeathed, and the monastery now became an autonomous self-governing Archbishopric under the greater jurisdiction of the Patriarchate of Jerusalem. Around this time also, tsars and Orthodox rulers of Moldavia and Wallachia sent generous donations. The latter also donated large monasteries in their territories to the Sinai Monastery as dependencies in the seventeenth century. At the same time, several requests of the monastery to popes and Western rulers were viewed favorably and accepted by them, for example the Austrian royal house and the King of France Louis XIII, not to mention Napoleon Bonaparte who, during his successful military campaign in Egypt in 1798, granted the monastery all previously standing privileges. Thus, the monastery gradually became a major religious center, with considerable influence and a rich spiritual life. In the sixteenth century it was also allowed to establish a school in the Chania dependency in Crete, which attracted several scholars; also Sinaite Archbishops ascended to Patriarchal thrones.

Apart from its illustrious and continuous historic legacy of almost one and a half millennia, the Sinai Monastery endures in the conscience of the Christian community as the site where “God was pleased to dwell” and the holy pilgrimage site of Saint Catherine.