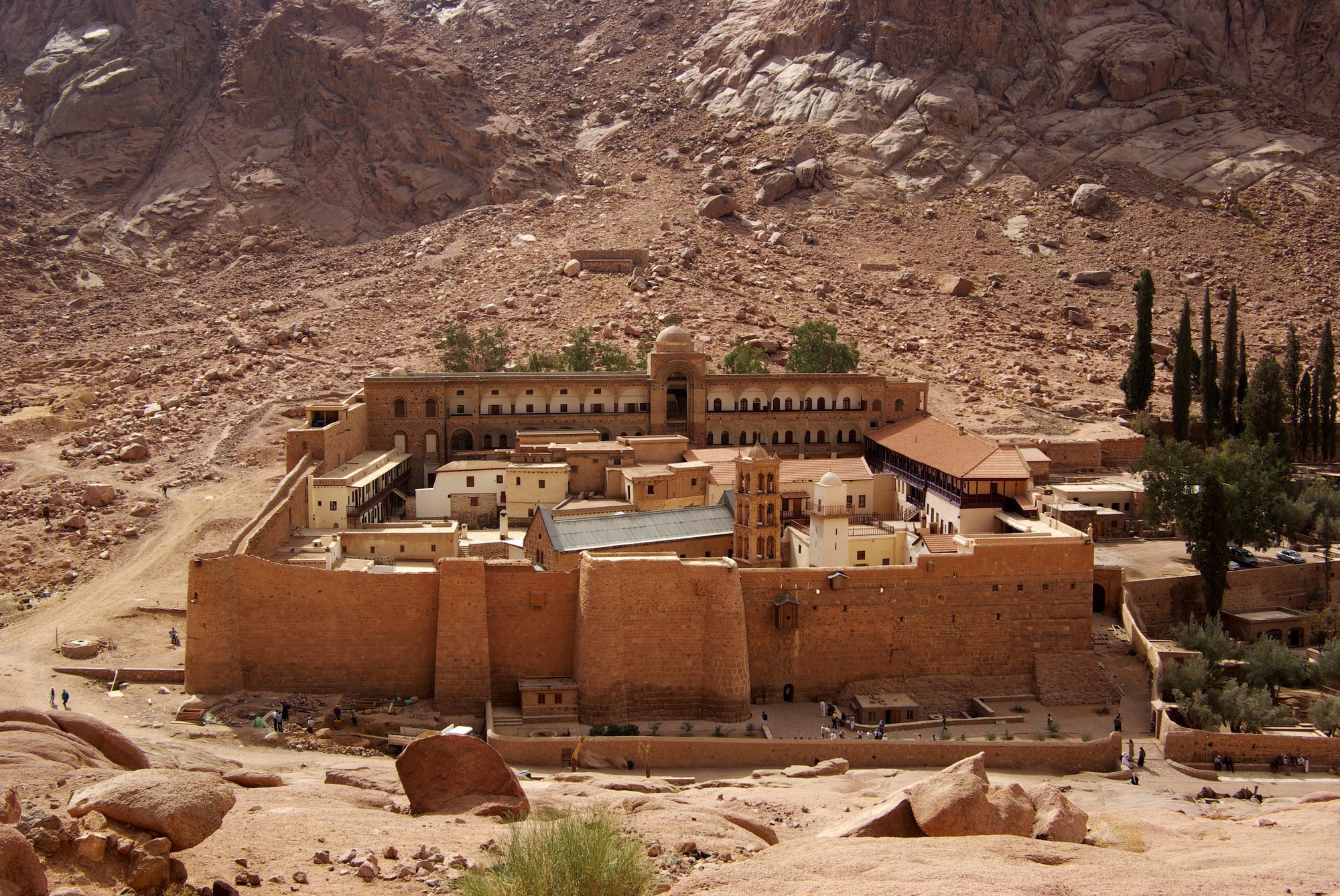 The Greek Orthodox monastery where God appeared to Moses in the Burning Bush. The oldest continuously inhabited Christian monastery with a history that can be traced back over seventeen centuries.

Saint Catherine's Monastery on the Sinai Peninsula in Egypt. December 2001.

Saint Catherine's Monastery on the Sinai Peninsula in Egypt. December 2001.

The Holy Monastery of Saint Catherine at Mount Sinai has always striven to preserve and showcase its heritage of religious treasures, following a long Sinai tradition that, in fact, acknowledged the importance of this task by establishing a special position for a Sacristan, the third highest ranking monk in the Holy Council of the Monastery.

Hence, the preservation to this day of the remarkable monastery collections, only a small part of which is on display in the Sacristy, is due to the constant toil and ceaseless care of the monks, as well as to some special historic circumstances, such as the fact that Sinai was spared the persecutions of Iconoclasm, and thus retained a collection of icons that represent all historical periods. The handwritten manuscripts and the precious ecclesiastical metalwork artifacts donated to Sinai, now on display in the Sacristy, attest to the endeavors of monks of the past, who risked their lives and travelled around the world to appeal for donations, as well as the generosity of devout pilgrims who visited the monastery from faraway lands. A large group of artifacts also reflect the influence that the monastery had among other nations, where it maintained thriving dependencies. A particularly notable exhibit of the Sacristy collection is the copy of the Ahdname, a decree granting several privileges to the monastery issued in 623 by the founder of Islam, Mohammad; this document has contributed immensely to the preservation of the monastery to this day.

In the last quarter of the twentieth century, the rapid technological progress and, particularly, the vast improvement in communications have brought to an end the long - and viewed with nostalgia, now – period of isolation of the monastery and its surrounding area from the rest of the world, a period that lasted for over one-and-a-half millennia. Adapting to this modern era, the monastery authorized - first in 1997 – the loan of several religious treasures to the Metropolitan Museum of Art in New York, for the “Glory of Byzantium” exhibition.

Of course, for us monks, the religious treasures and, in particular, the sacred icons are not primarily museum items, but rather functional parts of the liturgical life and tradition of the monastery, and their museum display at the time was viewed essentially as a ‘procession’, namely the exposition of the icon to the public as an instrument of contemplation and religious exaltation. During the Metropolitan Museum exhibition we enjoyed a most fruitful collaboration with the Museum’s associates and friends of the Monastery, Mr. Ph. de Montebello, Director of the Museum, Dr. M. Tarapor, Director for Exhibitions, and Dr. H. Evans, Curator of Byzantine Collections, which set the foundation for the creation of the monastery Sacristy in 2001.

The Metropolitan Museum of Art in New York and the Saint Catherine Foundation in London provided their assistance and consultation during the realization of the project, which was made possible through the generous grants offered by the I.F. Kostopoulos and the A.G. Leventis Foundations, who financed the installation of the display cases, and other construction work, respectively. We sincerely thank them, as we do other friends and benefactors of the monastery and this project, namely Pl. Arango, F. Livanou, L.E. Cotsen, R. and D. McCabe, and the companies J. & P. Overseas Ltd, and Titan S.A.

The monastery also wishes to thank the Egyptian authorities, and particularly the Archaeological Council, for its cooperation in achieving the common goal of the optimal preservation and promotion of its cultural heritage.

This publication was made possible due to the recent, generous grant of the A.G. Leventis Foundation; I must use this opportunity to warmly thank the Foundation on behalf of the Holy Synaxis and the Fathers of the monastery. Among the multitude of those that have contributed to this publication, I must primarily acknowledge the services of the initial editor, the late Professor G. Galavaris, an esteemed Byzantine scholar, and friend of the Sinai Monastery.

We hope that the visitor will be motivated to recall the ancient and sacred history of Sinai, to contemplate the miraculous events of this history, and thus receive the divine Grace and Blessing of the God in Trinity, Who revealed Himself on the God-Trodden Mount Sinai.

The Greek Orthodox monastery where God appeared to Moses in the Burning Bush. The oldest continuously inhabited Christian monastery with a history that can be traced back over seventeen centuries.